Introduction
I am doing this teaching practice in group 1/2 of a bilingual primary school in the Netherlands. They just started teaching bilingually a few years ago. On Monday and Tuesday juf A. is here and talks Dutch to the children, on Thursday and Friday Ms. P. is here and on those days they talk English in the classroom. They both take turns working on Wednesday. On my first day I started with an introduction game to introduce myself to the children. I brought a basket with objects that tell something about me. When showing an object, I asked the children what this object could say about me. When they didn’t know I would ask questions about the object which could make them guess the right answer. They were all focused and one of the girls asked me a few days later why I hadn’t brought the basket today and if I could bring it again because she liked it.

Skin-coloured
What got my attention was the following. Juf A. had little sticks which were either red or pink. After some discussing, one of the children said “It’s skin coloured”. Juf A. said “Is it? Look at N. That doesn’t count for everyone, does it?!” I had never realized this before. I remember when I was in primary school, I learned that it was called skin colour even though there were dark skinned children in my class. This was something I never used again later in life so had never thought about it, not until juf A. made that remark during this situation.

English during Dutch days
When the children were playing later that day, on the Dutch day (Monday), I overheard them talking when playing with different coloured beads. They were saying “Jij hebt ook veel pink.” A likewise situation happened when I asked one of the children (in Dutch) what was on his shirt and he responded in English, saying “Eh.. Bugs!”
Another situation like the previously mentioned is when I was showing the craft that was in my introduction basket. It was a cube made out of red and blue paper. When talking to 2 children about this cube, I told them I could make this cube from other colours also. Following this, the two children had the next conversation:
“Ja, groen en geel.”
“Paars en pink!”
“Of paars en yellow.”
“Of purple en blue.”
And this went on for a little while.

Forest walk
On Wednesday, which was a Dutch day this week, we went on a forest walk with the whole class. 5 parents were coming with us for support. One of the children who would ride to the forest with me, asked me what car I had. I told him that my car was broken and being made so we were going with my grandmother’s car. He asked me where my grandfather was and I told him he was gone. He asked me where he went and I said he had past away. The child then asked me how he had passed away and I told him it was because my grandfather was old (which was not exactly the case). I did not know how they dealt with questions like this with the Kindergartners on these school but because I couldn’t ask the teacher at the time I went with my own experience and feeling. I told juf A. about the situation later that day and she told me there were no clear guidelines but that how I handled is was fine, it is a part of life so it’s good to talk about it and not hide it when children ask about it. But it would be wise to not go into the cause of death, as the children could connect an illness to a certain death.

First day of English
I was excited about Thursday to begin. This would be the first day of talking English with the children all day and I was curious about how they would react to me talking English all of a sudden. Some of them found it a bit weird and asked me why I did it whilst giving me a confused look. I explained to them that when juf A. was here, I would talk Dutch and when Ms. P. was here, I would talk English. After one or two hours they were all used to it. I was really surprised about their level of English. They understood a lot of what I was saying. I can see a big difference with my teaching practice last year and this teaching practice. Last year, in Kazakhstan, I taught the same age as here and the children could only talk Russian. They started talking English from September until I got there (same period as this year). Those children only got a few words of what I was saying and we needed to work with a lot of hand gestures and pictures. During this teaching practice, the children are well capable of understanding whole sentences or big parts of a small story. Not only the children of group 2, but also the children who are in group 1. The only difference is the amount of English offered last year (an hour a day) and now (half of the week). So now I see what the effect is of those two amounts of talking English, after only 2 months.

Activities with children
On Tuesday, juf A. asked me if I would like to make the owls together with the children of group 2, which we crafted yesterday afternoon as an example. This would be my first little lesson to give to the children, which I was excited about. Some of the children told me that they couldn’t do it, but I tried to let them do it themselves anyway so I stimulated them to try. And of course, they all made them on their own for the most part. I knew they could do it!
Ms. P. asked me on Thursday if I would like to do a craft with group 2. Of course I would! My second little lesson with group 2. The idea was to glue a spiderweb in a little cardboard box. It was a small assignment but the children all wanted to participate and made great webs. We are letting them dry now and will finish them later on by painting them with liquid paint and making a spider.

After making the spiderwebs with group 2, Ms. P. asked me if I wanted to play a game with 2 girls. It was about shapes and telling whether they were big or small. We had 4 different shapes; triangle, rectangle, square and circle. Of all of these we had big and small ones and thick and thin ones. So 4 of each shape. I talked with them about each shape; how you call it in English, whether it is big or small and whether it was thick or thin. After naming all those characteristics of the different shapes, I put them in a box where they could reach in with their hand. I asked them for instance to grab me a big square. When getting one out I asked if this was the thick or the thin one. They liked it and learned two more words, as they never heard of thick and thin before. One of the girls gave me a hug afterwards and told me she liked the game.

On the last day of the first week, Ms. P. asked me if I could draw 5 lines from small to big with the children of group 1. I called them with me, one at a time. I explained it to them in English and they understood what to do. We would later put spiders on the lines, using stamps.

Birthday celebration
On Friday we celebrated the birthday of one of the girls in the class. This was a big event! During this, my notebook was in my bag and I didn’t want to distract the children by getting it so it might be that some information is left out. We started by sitting in a circle with the chairs, the girl’s mother was there too, to watch. The girl (A.) wore a birthday hat and sat on the birthday chair. She started off with showing the presents that she had gotten. Next, she could pick out a present from school. 2 children were being chosen to put the tablecloth and the birthday cake on the table. 5 other children were chosen to blow up imaginary balloons in colours that they like and paste them on the edges of the table. A. chose 3 other children to give instruments to which they could use during songs. The curtains were being closed, lights went off and the candles were lit. Now the singing started, a lot of singing! Dutch songs, English songs… All the songs had certain gestures to perform during singing. Now A. had the choice were to go for her birthday, there was a ticket for her. She had chosen to go to Africa. All the children had learned a new African song from another teacher that they sang together for her when she arrived in Africa. The teacher walked her through the whole process of going on a flight. From taking a taxi or bus to get to the airport, go through customs, over escalators (mind your step!) and finding the right gate. Then she got on the plane and 4 hours later, arrived in Africa. Now, the children sang the African song and next the teacher told her how to go home again. She decided to go home from the airport to her house with a motorcycle. Everything in this process were being supported by hand- or whole body gestures. During the birthday celebration they also lit fireworks for A. (By tapping on their laps and making boom sounds). The last part was for A. and another child to go to the hallway while one of the other children hid her birthday card. When the child was ready hiding the card, A. could come in and find it. The children now went back to their tables with their chairs and A. could decorate a cake on the big computer screen, she would then blow out the candles on there and a song would play. All the children started dancing to the song. And now for the best part of the birthday: the treat! The children had to close their eyes and A. would hand out her treats together with someone else. The teacher and all the children sang a ‘handing-out song’. It seemed as the children had done this whole process for at least 20 times already. It was an awesome happening, the children enjoyed themselves and it gave me some wonderful ideas to use in the future.

Nice things to remember
Flip the bear; a bear that goes home with one child every weekend to stay the weekend nights.
Letter suitcase; One letter every week. One of the children gets to take the suitcase home to find objects which start with that letter. They can show this at school on Monday.
Teacher’s helpers; two other children every day are the special helpers of the teacher.
Cards on the wall with pictures of what the program of the day looks like.
My first week is over and I already know that I am going to have a great time here. The children are all adorable and the teachers make me feel very welcome. Also all the parents are nice to talk to and I already got invited to the Christmas dinner. 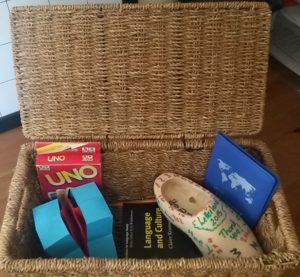 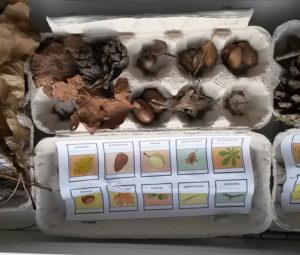 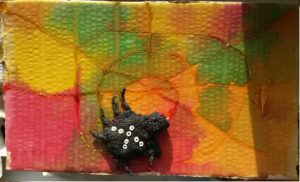 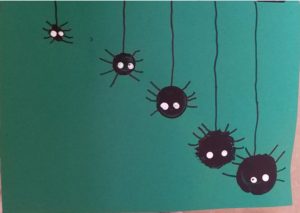