Monday
I started the week off today by teaching the whole Monday. This meant explaining the games to the children which we needed to check them for Onderbouwd. Group 1 was going to work with ‘gehoorkokers’ and group 2 would be busy with rhyming. But first during circle time Flip’s book was to be read. Flip is a bear that stays over in the weekend at one of the kid’s. Flip has a book in where the children can write the things they did together in the weekends. On Mondays, this child takes Flip back to school and the teacher reads the book during circle time, which was my task for today. Another activity we did during circle time was ‘Stapperdestap’, where the children can show off their new clothes if they have them. I brought a bag to school where stuff was in from ‘Zwarte Piet’, this Piet has difficulties with finding good rhyming words for these objects. I put a letter in the bag that he wrote, which asked the children if they could help him. When I got to school, the teacher told me they have a puppet in the class which is called “Ed, with the rhyming hat”. She told me that I could also use this puppet so that the children would get more acquainted with Ed. So instead of this rhyming Piet, I did the exercise with Ed. I am someone who over-plans everything, but I notice that during the day this gives me peace. Because the rhyming lesson changed in the morning, I didn’t plan it beforehand. I noticed this during the activity, I said everything more hesitant and had to think about what to say more. I believe that the children noticed this because they were quite busy during this activity. Last part of circle time, I read them a book about Dikkie Dik, this went well.

For group 1, there were toilet rolls rolled in a coloured paper which they could decorate by pasting on little papers. I told them not to use scissors but to tear the paper. I thought this would be good for them to practice. This activity was done at one of the table groups where 6 children could work at once. I sat with them to work on it. Group 2 were busy working on a rhyming paper. They had to colour 3 out of 4 pictures in every row that rhymed. The girls thought it would be nice to cut it out and paste it on a coloured paper. This was actually a nice idea so I told the boys if they wanted it too, they could do this. The children of group 1 that were not busy with the craft could choose a game. When one of the children was ready with the craft, I called someone who was playing to come over and do the craft now.
We couldn’t go outside because of the rain so I chose to let them play and work a little longer. After lunch, when it was time to go outside again, we could thankfully go to the gym because it was still raining. They were quite loud in the classroom so I was glad that we had the opportunity to go there. I let them run around first as they were so excited that they could release their energy. After some running, we played a game called “Schipper, mag ik overvaren?” When we were back in the classroom, we changed clothes and had about 20 minutes left. I decided to put the Sinterklaasjournaal on. When this was finished, it was time to go home.

Thursday
The second day this week that I taught the children. They had a little bit of time to play and then instead of going in the circle, they changed clothes first for gym later on. This was kind of silly because we always have circle time after playing. The only thing that had to be done in the circle was reading the same book I read last Monday but now in English. I decided to read this while half of the children was finished changing clothes and the others were still busy. Because I had already done this, not much was left to do in the circle. Also, the teacher told me that the class that had gym before us didn’t go so we could go a little earlier. Because of this, I made the decision to no go in the circle and explained this to the children.
Gymtime! Next week my teacher from school comes here to observe me during a gym lesson so this was my last time to practice. I had three activities set up in the gym. One where they could throw beanbags in different kinds of goals, one were they had walk over different kinds of benches to practice balancing and the last was sort of like a circuit where they had to climb on something to climb over a climbing frame. It went quite well with a few points of attention for next time, which were:
- Make sure during explanation that everyone has a place to sit on the bench. Now 2 children didn’t fit and I told them to sit on the ground. Some other children saw this as an invitation to also sit on the ground which made it a little chaotic at first.
- Make all the groups start at the same time. When I tell the first group to start and something happens, I can’t see it because I am busy making the other groups.
- It was quite harsh to say at the end that we were going to stop now. It’s better to tell them at the end “2 minutes before we go back” and “1 minute before we go back”, so that they know it is almost time to go even though they don’t have much knowledge about what a minute is.
When back in class, I chose to let the children of group 2 pick some work out of the cupboard and to show me when they were finished to check. For group 1 I printed out a big colouring paper that they could colour in with crayons. The teacher was checking some children in the hallway for this week’s goal. She came in at the same moment that one of the group 2 girls said she was ready with the work and asked me if she could now play. The teacher said she knows she has to do 3 works. I didn’t know this so from then on I could also tell the rest who said they were finished. During lunch I put on the Sinterklaasjournaal for them to watch. We had a little time left after lunch to play and the last hour we could play outside.

Friday
What a hectic but fun day! Sinterklaas came to visit school. All the children were excited, as well as the teachers. In the morning, teachers and children met outside to wait for the arrival of Sinterklaas and his Zwarte Pieten. Every class made different kind of hats, we made Amerigo hats (the horse of Sinterklaas). We sang songs while they arrived and he spoke to all of us. About an hour later, he visited our class. Sinterklaas read from his big book in where information about the class is stated in. He told the children that he read they have a new teacher in class, Miss Anne, and he asked what they thought of me. Luckily they were all positive, you never know! Another big activity of today was the Pieten-gymnastics. The children could earn their Pieten-diploma here. They all passed, great job boys and girls! The rest of the day was full with fun games and activities. Every group had something to do that had something to do with Sinterklaas (for instance decorating a gingerbreadman) and they switched groups so that they all would do all activities. We also sang and danced a little. All with all a fun and exciting day! 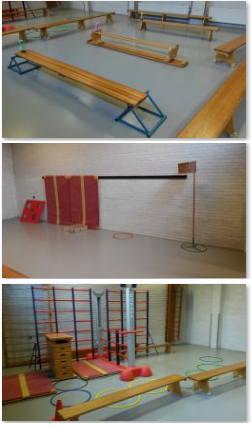