0900 – 0930 Circle time
Circle time was supposed to be in the theme ‘language’. So I printed all the names of the children and laminated these. I gave them all their own name and asked them how many letters their name has (to combine language and math) There were 10 cards on the table which were numbered 1 to 10. This went well. When children were struggling, I asked someone else to help him/her. Now, I wanted to count with them together how many names were on each card to see which was most and which was less. The lesson was taking too long for most of them and they were getting more active than I wanted to. At the end of the day, when talking about the day, the teacher gave me the advice to stop the circle sooner when it takes too long for them. She also gave me the tip to involve the whole class more to keep their attention. When my focus is on one child, the rest becomes kind of bored and gets active because of that. It could help if, when the first child does something that is not OK, I should instantly correct this behaviour.

0945 – 1030 Gym
The last gym lesson I gave, was my first one. We had put up some big material for them. This time, I had an empty gym so I had to think of a totally different lesson than last time. The idea was to make 2 groups. One of the groups would stand on one side of the gym and the second group on the other side. The children of one of the groups all got a beanbag. They had to think of ways to get this beanbag to the children of the other group without using their hands. Every time both groups went back and forth once, I gave them another body part that they couldn’t use. When I saw all children putting it on their head, I told them that now they couldn’t use their hands ánd head. The children liked this activity and were visibly having fun. When we had 15 minutes left, I asked them if they wanted to keep doing this or wanted to do another game. They were in for another game. In the morning, I put the numbers 1 to 10 somewhere in the gym on the walls. I had them sitting on the bench again and explained that if I would say “How many teachers are here now in the gym?”, they would have to think of the answer and then run to the 2. After a few minutes, they all just started running around, but were having fun doing this. I thought it would be a good thing to let go of their energy and just let them run. Because I wasn’t sure if I could do this, I asked the teacher at that moment and she said it was a good idea. So I let them run for the last 5 minutes, before going back to the class. After an energetic gymlesson, it was time to eat snack.

1100 – 1200 and 1300 – 1400 Work/Choose
For group 1, I made this craft on the picture. They could cut out the beard, hat, cross and face and paste it on a blue paper. They then had to think about ways to put eyes and a mouth in his face. And of course, one of them thought it would be nice to colour this with Wasco, so now everyone did the same. Group 2 was going to mozaiek. I printed a present with little squares in them for each child. One of the table groups could make this in the morning and the other group in the afternoon. The group that was not busy with this activity, could make Sinterklaas objects from clay.

1200 – 1230 Lunch
They have a traffic light in the class. I saw the teacher use this sometimes during lunch. When the red light is on, they are supposed to be quiet and eating. I thought I would give this a try. I asked them if they would like it if I put it on for 5 minutes and they did (I knew they would). I put the hourglass on so they would knew when the 5 minutes would be over. I was consistent during this time. When only one child would talk, I would point at the red light and they remembered that they had to be quiet.

1230 – 1300 Beebot and dancing
After lunch, the teacher wanted to put them in the circle to explain a new toy to them. She had to show this on the floor in the middle of the circle so we had to put these tables way. I asked her if it would be a nice idea to dance a little on Sinterklaas songs after the explaining of the toy, as we couldn’t go outside because of the rain.

Thursday
Today, it was Miss Pim’s birthday! We partied all day long. First thing in the morning, we started with circle time. This was the time to sing and for the children to give their presents. Following this, we played musical chairs (Dutch: Stoelendans) and Duck, Duck, Goose (Dutch: Zakdoekje leggen). Following this, Miss Pim brought cake for everyone to decorate and eat. After this little break, there were several board games that the children could choose from to play together. Lunch was also special, as Miss Pim brought sandwich toasters to make croque monsieurs of the children their bread. The last thing on the program was going to the gym. There was still some big material there where the children could climb on. When Miss Pim was outside with the children to wait for parents to come and collect them, two boys came back in to go to the bathroom. They came into the classroom and spoke about the party. One of them said “It was a nice party, but not really nice.” So I asked him way. He told me that he had to give his present to O.’s (another boy of the class) mother so he didn’t give it to Miss Pim. I asked him if it could be that he made a drawing, which he said he did. One of the presents that Miss Pim got was a book in where a drawing of every child was pasted. This boy probably did not know that his drawing was in here. So I told him that Miss Pim got this book and we could look if maybe his drawing was in there. It was! I asked him if he now thought that it was a really nice party and he did! The next day, Miss Pim showed the book during circle time and showed the class every drawing that was in it. A fun game with no work and all play!

Bee-Bots
For the ‘week van de mediawijsheid’ the school has borrowed 4 bee-bots, the toy which was explained Tuesday at the end of the day during circle time. Classes can sign in for a few moments a week to use this Bee-Bot. On Wednesday, I took a few groups of 3 children to the hallway to play with this Bee-Bot with them. We had 3 different pictures and put them next to each other on the floor. The Bee-Bot was next to start and children were asked to make the Bee-Bot go to a certain picture. How do you do this? Several tasks were done with this Bee-Bot. Also, for instance, put start next to the Bee-Bot and one of the pictures one meter further. How many steps does it take for it to get to the picture? On Friday morning, we could use it again. One of the girls in the class (S.) needs some more challenge. This Bee-Bot can be programmed to walk a certain track. We already worked with this with all the children in the class, but with S., I took it a step further. We build a track of blocks and she had to figure out how many steps it would take and where to turn to get to the finish line. There also is a farm mat which belongs to the Bee-Bot. I put it in front of her and she had to figure out how to get from one point on the map to another without crashing into walls and fences. 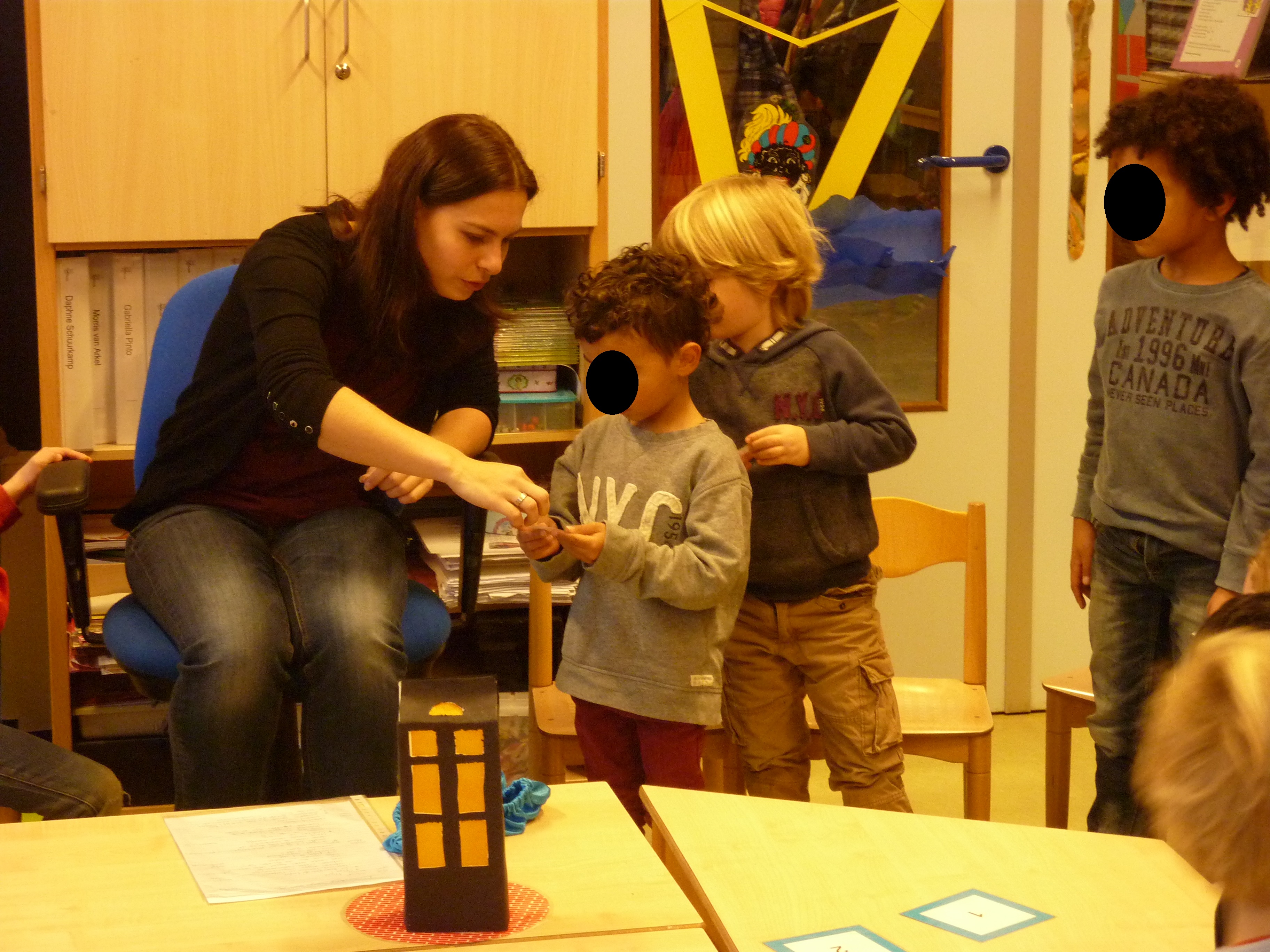 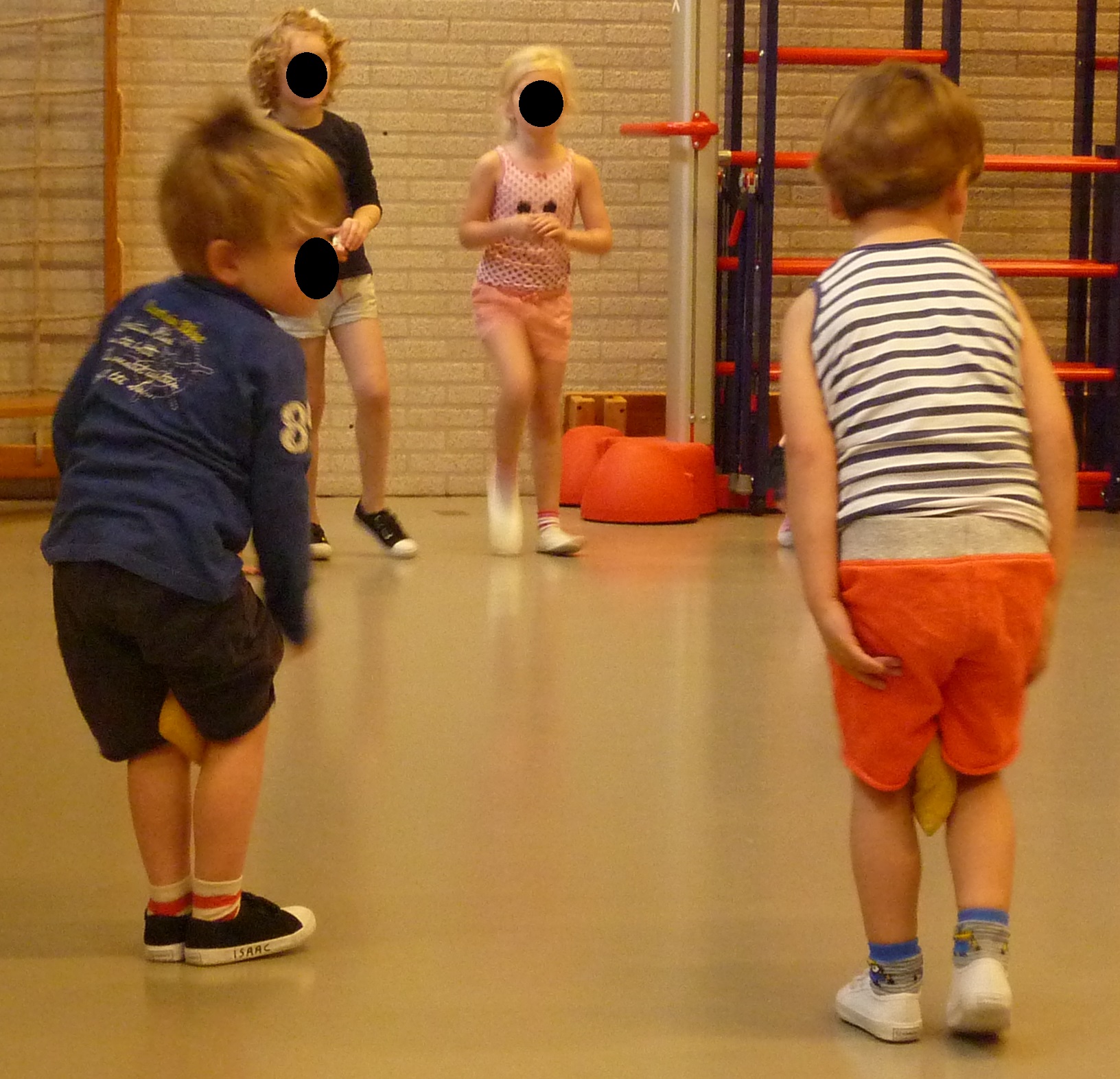 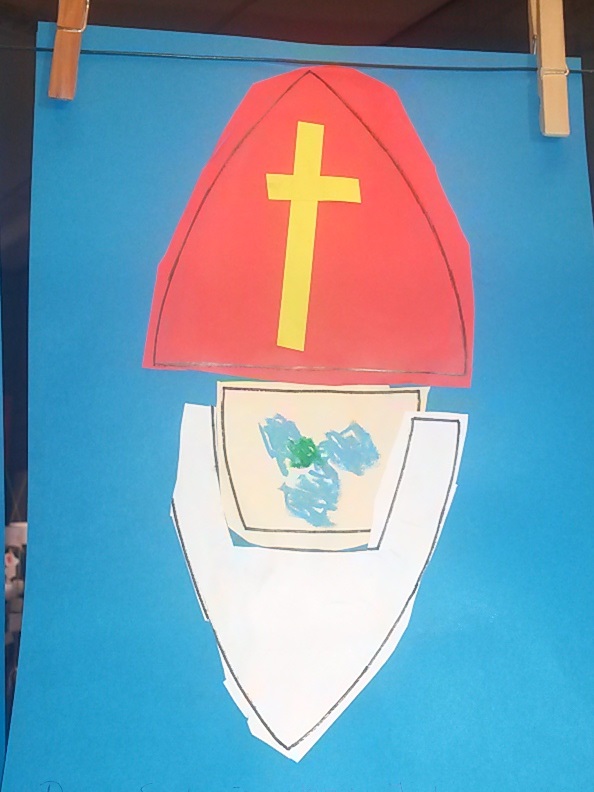